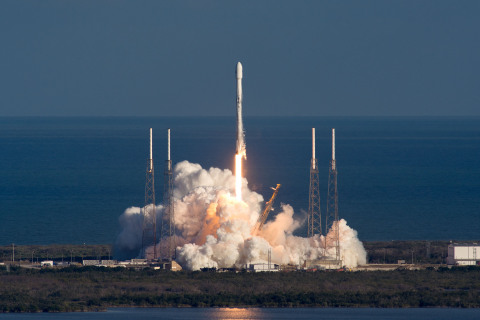 The GovSat-1 spacecraft was successfully launched into space today on board a flight-proven SpaceX Falcon 9 rocket at 4:25 PM EST from Cape Canaveral Air Force Station.

GovSat-1 is the first satellite of GovSat, a public private partnership between the Government of Luxembourg and the world-leading satellite operator SES.

The multi-mission satellite will be located at the 21.5 degrees East orbital slot, to serve governmental and institutional customers over Europe, the Middle East and Africa, and provide extensive maritime coverage over the Mediterranean and Baltic seas, and the Atlantic and Indian oceans.

The satellite is entirely dedicated to government and institutional users, and will be operated by GovSat from the Secure Mission Operations Centre in Luxembourg. The secure and robust connectivity on GovSat-1 will enable critical communications in theatres of operations, interconnect key institutional or defence sites, and support applications such as Intelligence, Surveillance and Reconnaissance (ISR) and communications on the move, among others.

The Luxembourg Government has pre-committed an important amount of capacity on the satellite in support of its NATO commitments. The remaining capacity will be made available to governmental and institutional users on commercial business terms.

“The launch of GovSat-1 opens up a new era of secure satellite connectivity for governments and institutions," said Patrick Biewer, Chief Executive Officer of GovSat. “It brings differentiated capabilities on secure X- and military Ka-band, leveraging private sector efficiencies and strong governmental support. GovSat-1 was designed to meet the specific needs of government customers, and will enable a wide array of defence and civilian security applications, even in the most remote locations.”

Xavier Bettel, Prime Minister of Luxembourg, said, “Luxembourg has always been a pioneer in the space industry and has a long tradition in innovative partnerships with private aerospace companies. The launch of GovSat-1 is the beginning of a new space experience for Luxembourg, after the foundation of SES in 1985 and the launch of the first SES satellite nearly 30 years ago. GovSat and the launch of GovSat-1 is another step towards strengthening the position of Luxembourg as a key player in the aerospace sector, and contributes to a diversification of our economy.”

Etienne Schneider, Deputy Prime Minister and the Minister of the Economy, said, “Luxembourg has delivered on our pledge to increase our defence spending as a NATO ally in line with our defence commitments. We are doing this through an innovative partnership with the Luxembourg based leading satellite operator SES. We are thus providing an efficient and reliable solution for satellite communications that meets the increasingly sophisticated demands of our NATO allies. We are leveraging the competences of the Luxembourg space industry, which enjoys a great reputation worldwide and is further being developed through Luxembourg's SpaceResources.lu initiative.”

Karim Michel Sabbagh, President and CEO of SES, said, “Global government satellite communications is an important growth driver for SES, and we continue to expand our capabilities to serve this thriving market. The GovSat-1 satellite brings differentiated capabilities which complement SES’s existing suite of offerings for governments and institutions. This unique solution is possible thanks to our partnership with the Luxembourg Government.”

The spacecraft was built by Orbital ATK and is based on the GEOStar-3™ satellite platform. It is Orbital ATK’s 40th GEOStar satellite.

GovSat is a public-private partnership between the Government of Luxembourg and the world-leading satellite operator SES. GovSat’s mission is to provide secure, reliable and accessible governmental satellite communication services to address the demand resulting from defence and institutional security applications. The company’s first satellite GovSat-1 is a multi-mission satellite that will use X-band and Military Ka-band frequencies on high-power and fully steerable mission beams to support multiple operations. For more information visit: www.govsat.lu