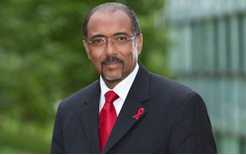 1. With only one year left until the 2015 target date for achieving the UN Millennium Goals, how would you describe UNAIDS’ biggest accomplishments and challenges?

The response to HIV has been unique. Around 30 years ago when the virus was first identified people living with and affected by HIV came together in a global movement of solidarity with world leaders, politicians, health and development experts, activists and scientists. This movement spurred action and delivered results for people. It enabled the world to rise from despair to hope for the future.

Today, new HIV infections have been reduced by 33% since the peak of the epidemic, AIDS-related deaths are down by more than 30% and more than 10 million people have access to lifesaving antiretroviral treatment. This is a remarkable achievement.

Science is proving to be invaluable in the response to HIV as we learn that antiretroviral therapy not only keeps people alive and well, it can also prevent HIV infection, reducing the risk of transmission to below 5%. This is stopping children from becoming infected with HIV and has resulted in a 52% decline in new HIV infections among children since 2001. These developments and the progress we are seeing means we are now starting to talk about ending the AIDS epidemic and seeing that as a real possibility for the future.

Despite this unprecedented progress there are still many challenges as people are being left behind. People most at risk of HIV infection including people who use drugs, sex workers and men who have sex with men are still not being reached with HIV services. The response to HIV must be grounded in human rights so that everyone in need has access to HIV services.

Antiretroviral therapy has changed the face of the epidemic. In 2003, just 400 000 people had access to the lifesaving treatment. By 2012, that number had risen to more than 10 million. This has been possible in large part as the cost of HIV medicines has come down dramatically in recent years. From US$ 10 000 per person a decade ago to less than US$ 100 in some countries today.
However, access to HIV treatment is still not equitable—especially for people most affected by HIV including people who use drugs, sex workers and men who have sex with men. Also only around half of all people living with HIV know that they have the virus so much more needs to be done to encourage people to take an HIV test.
Access to antiretroviral treatment has to be made available for everyone who needs it. To do this the price of medicine needs to be driven down further, particularly for second and third line regimens, and countries have to look at ways of producing medicines locally to make access sustainable and affordable.
If we continue to scale up access we should be able to reach 15 million people with lifesaving treatment by 2015 which would be a big stride towards reaching the 28.6 million in need globally.

3. What impact do you expect from the children book ‘The Bravest Boy I Know’, co-published by the UNWTO ST-EP Foundation and UNAIDS? What are the plans for the future?

Change starts with children. If children have access to education and are given the right information about HIV they become important actors of change. They can ensure the school environment is a place of tolerance and diversity and break down the barriers of stigma and discrimination and accept each other’s differences. This is why we came up with the idea of a book for children.
We hope it will show that people living with HIV, with access to treatment can live normal, healthy lives. And we hope that through this book people will understand more about HIV. Talking openly about HIV is the best way to ensure that people are no longer afraid to seek out information about HIV and access HIV prevention, testing, treatment and care services.
So far the UN MDGs Thank You Small Library initiative has established 143 libraries across 18 countries, mostly in Africa. The aim is to roll the project out so that each of the libraries has a UNAIDS Corner.

4. What do you think about the role of the Republic of Korea in HIV/AIDS prevention and elimination, as a member of the international community?

All countries have to ensure that AIDS stays at the top of political agendas. AIDS also has to be central to the post 2015 debate. This is particularly important because if countries keep their commitments and engagement to ensure that HIV is a priority we will be able to end the AIDS epidemic as a global health threat and improve the lives of millions of people around the world.